Now that we have a Sequence File containing our newly “structured” data, let’s see how can get the results to a basic query using MapReduce.

We will illustrate how filtering, aggregation and simple sorting can be achieved in MapReduce. For beginners, these are fundamental operations that can help you understand the MapReduce framework. Advanced readers can still read it quickly to get familiar with the dataset and get ready for the next posts which will be about more advanced sorting and joining techniques.

“View all donor cities by descending order of donation total amount, considering only donations which were not issued by a teacher. City names should be case insensitive (using upper-case)”

This query actually involves quite a few operations :

This task could be broken down into 2 MapReduce jobs :

Here is an illustration of the 2-job process we will implement, using a tiny sequence file example for the dataset : 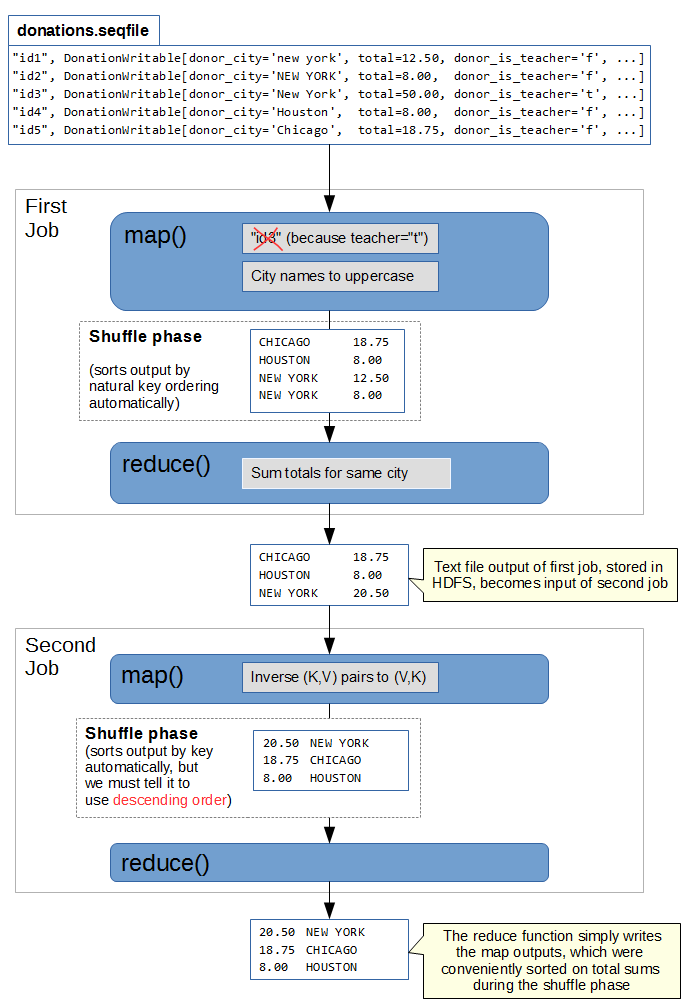 Here is the code for this job : https://github.com/nicomak/[…]/DonationsSumByCity.java

This is a pretty straightforward and standard Map/Reduce job. It’s similar to the Word Count example given by Apache in their MapReduce tutorial.

A couple of things to notice here regarding the Sequence File as the input :

Since we are doing an aggregation task here, using our Reducer as a Combiner by calling  job.setCombinerClass(FloatSumReducer.class) improves performance. It will start reducing the Mapper’s output during the map phase, which will result in less data being shuffled and sent to the Reducer.

Here is my code for this job : https://github.com/nicomak/[…]/OrderBySumDesc.java

This second job will take the output of the first job and sorts on the aggregated sums. The mapper simply inverses the input (city, sumtotal) pairs into output (sumtotal, city) pairs.

Then we simply use the basic default  Reducer class and let MapReduce do the sorting on “sumtotal” for us.

In the next paragraphs we will refer to the mappers outputs (sumtotal, city) pairs as (K,V).

In this job the input file is a plain text file with <city, total> pairs on each line. The easiest way to deal with this is to use the KeyValueTextInputFormat and receive both key and value as Text objects in the Mapper. Then we convert each “total” value from Text to FloatWritable in the “map” method before inverting the key and the value. This is what I did to keep things simple.

However if you really want to receive <Text, FloatWritable> pairs directly as the mapper’s input, here are a couple of possibilities :

The Reducer class is used implicitly by MapReduce if no reducer class is specified, and if job.setNumReduceTasks(tasks) was not set to 0 (in which case there is no reduce phase). It is not necessary, but I still decided to set the reducer class and number of tasks explicitly in the driver code to be more clear.

In general, reduce operation receive an input in the form (K, list[V1,V2,...Vn]) containing a Key and all of its corresponding Values outputted from all Mappers. The reduce operation has to decide how to “reduce” it into a single pair (K,Vr) with a reduced value. This could be done by summing the values (as the first job did), multiplying them, appending them to a Set to find unique values, etc …

But the base Reducer does not really reduce values. Instead, it simply outputs all the values separately in (K,V1), (K,V2) … (K,Vn) pairs. In fact, if you don’t use any reducer, and set the number of tasks to 0, there would be no grouping of data. So you would end up with (K,V1), (K,V2), … (K,Vn) pairs as well, which are the outputs of your map method. So using the default  Reducer or no reducer at all produces the same Key/Value pairs in the output. Which is why it is often called the “Identity Reducer”.

So why bother using the default identity reducer ? Well we don’t actually need to reduce values here, but when using a reducer, MapReduce will automatically sort data on Keys between the map and reduce phases. So using a single Reducer task gives us 2 advantages :

There is only one problem to handle now. In the first point above, I said that our map (K,V) pairs, which are in our case (sumtotal,city), would be sorted by increasing key. But our query said that we need to sort in decreasing order. Luckily, we can define our own comparator and tell it how to order the keys.

We create a WritableComparator which simply multiplies the “compareTo” value between 2 floats by -1, to have a descending order :

We must specify this class as the Sort Comparator by calling  job.setSortComparatorClass(DescendingFloatComparator.class).

Here are the terminal commands for executing and viewing the outputs for these 2 MapReduce jobs :

As expected, the output of the first job is a plain text list of <city,sum> ordered by city name. The second job generates a list of <sum,city> sorted by descending sum.

In this query we did a simple sort on a single attribute. In the next posts we will explore more advanced sorting techniques to sort on multiple attributes and sort using multiple reducers.