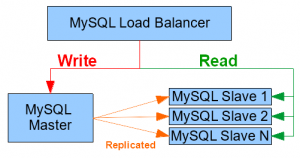 In the previous part we use the official Cassandra images from Docker Hub to start containers and have them form a cluster. In this post we will see how to create our own docker images to facilitate the deployment of a Master-Slave replicated MySQL cluster. We will also use a HAProxy container to load-balance our MySQL instances.

MySQL has an official Docker image on Docker Hub. It is a simple image to start a MySQL instance with the given database name, user and password in the container environment variables. But unlike Cassandra, MySQL does not have an official or default way to be clustered, so the image does not provide a way to do it out of the box.

Master-Slave replication is one way of scaling out instances, and is usually configured manually. I have written a bash script, which I explained in a previous post, to automate this process. What we will be doing in this section is to extend the official MySQL image, and simply add a few replication configurations on top of it, and also enable using my automation script in the containers.

Since we will be extending this image, let’s first study how it works. To understand an image we must first look at its Dockerfile, because it is the file containing the instructions on how to build the image. So in a sense it is the definition of the image. It is usually referenced on the Docker Hub page. The Dockerfile and resources for the latest Docker image can be found in the official docker GitHub repo:

The first line of the Dockerfile contains  FROM debian:jessie which means that the image is an extension of the debian:jessie image. This means they are taking an image containing a debian distribution, and will install mysql on top of it. The following lines are mostly ENV and RUN commands, to set default environment variables and run linux and debian commands to install mysql packages, change permissions, move files, etc… These are all the commands that actually install Mysql in the image.

At the bottom of the Dockerfile we can see a few important things:

So when you run a container using this image, the container already contains Debian with all MySQL binaries, and it runs the docker-entrypoint.sh script. In the same repo, next to the Dockerfile, open the script and take a look at what it contains. Most commands in this file read the environment variables passed during container startup, and prepare the database accordingly (database and user creation, privileges, etc…). The last line of the script is  exec "$@" to run mysqld, which was automatically passed as the argument to the script, because it was the CMD value in the Dockerfile.

The first instruction, FROM, shows that we extend the official image of mysql, version 5.7.

The second instruction, RUN, runs shell commands. In this case it installs a few APT packages on top of the base image. The openssh-client package is useful to use SCP protocol when we will transfer the mysql dump from master to slave(s). The vim and net-tools commands are not necessary but might be useful for debugging purposes inside the container.

After that the COPY instruction copies files to the image’s filesystem. Here I decided to copy all sources to the /app/ directory in the image filesystem.

The ENV instructions define default environment variables which will be used in the container. These can be overridden by using the -e option when starting a container.

Finally, we define the ENTRYPOINT. This overwrites the entrypoint script from the base image.

The new entrypoint for this new image, new-entrypoint.sh, starts by creating the necessary configuration files for mysql replication. It replaces the environment variables in custom.cnf.template to produce /etc/mysql/conf.d/custom.cnf. It does the same thing with credentials.cnf.template to store user/password for remote commands later.

Then, if the container being created is destined to be a slave, and that the master’s IP address was defined in the environment variable AUTO_INIT_MASTER_IP for automatic replication activation, the replication script is started in background mode. The script will wait until mysql is started before activating the replication.

This script is very similar to the script I explained in a previous post about MySQL replication automation, with a few little changes:

Considering that you are in the directory where the Dockerfile is located:

The first command build the image and calls it rep_mysql. After this command, you can already  docker run the image locally because it exists in your local repo.

The second command tags the image with an DockerHub account prefix, and a tag suffix, which is the version 5.7 here. The third command pushes the image to Docker Hub, so that it can later be downloaded by any host connected to the internet. Note that for these 2 steps you need to create a Docker Hub account.

The image then gets its own page on Docker Hub, like this: https://hub.docker.com/r/nicomak/rep_mysql/

Running the MySQL containers with Replication

The image I have created is essentially a MySQL image but with extra configurations, and a script which can automatically initialize replication. This script can either be run anytime after the containers have started, or during a slave startup by passing it the IP address of its master in AUTO_INIT_MASTER_IP.

To illustrate its usage, let’s first create containers on 3 of my nodes: ubuntu1, ubuntu2 and ubuntu3:

The remote image pushed from ubuntu0 earlier will be downloaded automatically on these 3 hosts. Note that the commands could have all been run from ubuntu0 using ssh.

Then the replication can be started using the script within the container in ubuntu1:

This “grouped” replication with 2 slaves is optimized because the script locks and dumps the master only once for both slaves.

If we created a 4th instance (i.e. the 3rd slave) on ubuntu4, we could initialize its replication using the auto-initialization parameter:

We can now create a table and insert rows in the master mysql instance on ubuntu1, and the changes will be automatically replicated to the slave nodes ubuntu[2-4].

Deploying a HAProxy container for Load-Balancing

We now have 1 Master which replicates any changes to the djangodb database to the 3 Slaves.

To make good use of their replicated data and achieve collective performance and availability, we can use a Load Balancer. Luckily, HAProxy has an official image that we can use strait out-of-the-box. We won’t need to create our own image, but we will need to configure a few things first.

Create a User for Status Checks

The first thing we need to do is create a password-less MySQL user for HAProxy to perform its status checks.

If we create the user on the master ubuntu1, while using our replicated database djangodb, the user creation will be replicated on all slave nodes, which is convenient:

The next step is to write a haproxy_mysql.cfg configuration file which will define how HAProxy must behave. Here is an example I wrote:

❗ Host IP addresses must be used in the configuration file instead of host names (ubuntu1, ubuntu2, etc…).

There are 3 listen groups:

To start a HAProxy 1.6 container on host ubuntu0:

We can now test the 3306 and 3307 ports by checking on which instance the requests end up:

The statuses and stats of should be viewable in the HAProxy UI:

So what we deployed in this part is a small MySQL Master-Slave replication cluster. The HAProxy is the gateway to the cluster resources:

This way we have an instance dedicated to write operations, and load-balanced slave instanced to scale out read operations.

We have also a backup instance to take over write operations if the master dies. If that happens, however, manual intervention (or extra automated processes) must be used. The backup will have to be quickly declared as the new master for all slaves, otherwise the slaves will stay master-less and keep serving the outdated data. Ways to do this are:

In the next part we will create our Django web application. Based on what we did here, the web apps will have to communicate with the HAProxy server, and know when to use the port 3306 or 3307  based on the type of MySQL requests.